Looking after the younger generation

Working as a nurse during wartime was no small feat.

But the memories and friendships made during those days are what 98-year-old Margaret Spring has cherished her entire life.

Born in 1921, the great-grandmother trained at The Royal Children’s Hospital and graduated in 1945, at the height of the Second World War.

“It was wartime of course and both my brothers were away serving, so I thought I would swap across and sign up too,” Spring, who is the RCH’s oldest living former-nurse, says.

“But they wanted me to stay. It was a wonderful hospital to train at and I’ve always loved children (so I did).”

Luckily, by staying, Spring was able to meet her husband, Ted, who was a doctor.

“He was sent away to Timor straight after we were married. He did a tremendous lot of work. He was incharge of malarial control,” she recalls, with a memory still as vivid as ever.

During the tumultuous time, the RCH was evacuated to the Dandenong Ranges.

“I was in the baby ward and we were evacuated. We each grabbed a baby and were taken to Burnham Beeches,” she says.

Spring recently moved to a nursing home in Point Lonsdale, near Geelong.

She says she has lived a “charmed life” and is lucky to have her health.

“I’ve had a very wonderful life, my kids and family they’ve all been wonderful. They keep me in touch with everything,” she says.

And looking back, she’s proud to have played a role in such a rich part of Melbourne’s history.

“We’ve come a long way. The most progressive hospital. It’s wonderful and I am pleased I trained there,” she says.

“I think it’s the most wonderful hospital, I think it does wonderful things. And I would recommend anybody to train there and do what you should be doing in life – looking after the younger generation.” 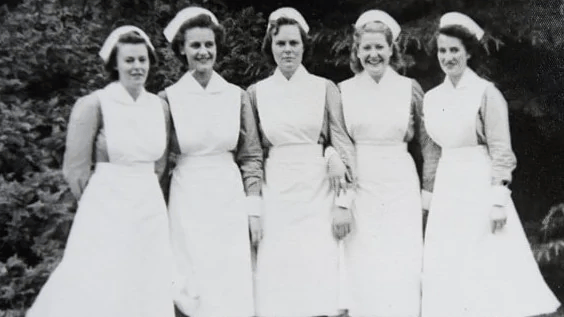