In it for the long haul 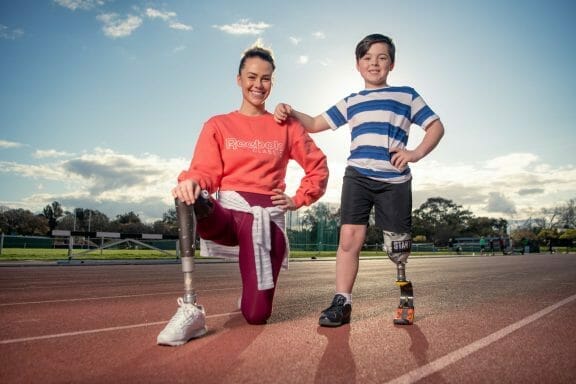 The dreams and hopes of Kelly Cartwright and Hamish Cain have been built on the same factory floor.

The pair — one a gold medallist Paralympian and the other sporting his first blade running leg — have both survived childhood cancer, the loss of a leg to save their life, and then the chance to be rebuilt for their new life. This is all thanks to The Royal Children’s Hospital.

“I literally can’t thank them enough,” said Cartwright, 30, who was diagnosed was a rare and aggressive cancer in her knee at age 15.

“The nurses, surgeons, the oncologists are my heroes.

“You put your life in their hands and I can only appreciate now, as a parent, what my mum had to go through leaving it up to them.

“They did the best they could and I’m here today because of that.”

Like all departments — in their own way — across the RCH, the Limb Difference Clinic takes a diagnosis of loss and heartache, and transforms into a dose of inspiration and achievement, whatever is ahead for that child.

For Hamish, 7, that has meant supporting him with his 10th prosthetic leg — his first running blade, which will allow him to keep up on the footy field and basketball court — since losing his left leg through the knee joint following a cancer diagnosis at three months of age.

“It was absolutely devastating, but they made a really difficult experience bearable,” said mum Kim Cain.

“They’ve made sure we know they’ll support him right throughout his childhood to live with this, and still accomplish what he wants.”

Next year marks the 150th anniversary of The Royal Children’s Hospital, which will be celebrated with a year of public events.

Many Victorians, just like Cartwright and Hamish, have  a special story about how they or their family’s lives have been changed or saved by the hospital.

The hospital today launches an online portal, where past and current patients, staff and their families can share their stories.

The RCH Foundation Chief Executive Officer Sue Hunt said the community had always been at the heart of the hospital; right from when two Melbourne doctors and a committee of well-connected women opened a six-bed charity hospital in 1870, through to its standing now as one of the premier hospitals in the world.

“Medical advancements and innovation have been the hallmark of this hospital, as well as teaching and then research.

“It’s always been about the people, not the building, and their dedication to the children that has made those innovations possible.

“That’s what makes this children’s hospital so special.”